These tea towels were a great project. They are made from 2/8 cotton (or 8/2, depending on where you live) and are very soft. I had a bit of a learning curve as I had never worked with anything this fine before.

I made them on my Leclerc Fanny floor loom. Towels were what inspired me to get a loom in the first place. When I went to a weaving workshop, the teacher showed me some towels that she was working on. I loved them, but couldn’t justify paying $30 per towel even though they were so nice.

It makes total sense to buy a loom, figure out how to use it, spend $$ on thread and take the time to weave all to save the money. (This is said in a sarcastic voice.) I know logically it doesn’t make sense, but other makers will get it.

Everything took longer than I expected because there were so many threads and they were so long. I made five towels, so the warp was the longest I have ever done. There were a couple of tangles, but I worked it out.

They finished at 13″ x 21″. When I make more, I will make them bigger. They shrunk a lot more in the finishing than I thought they would.

The warp is natural with evenly spaced blue stripes. I didn’t use a pattern, I just divided the numbers evenly and did basic 1, 2, 3, 4 threading. Then I tried different tie-ups and patterns based on that.

This one is my favourite pattern.

And this one is nice too.

I’m not a huge fan of this one, and I don’t know why. I don’t know if it’s because it’s predominately blue or just the weave pattern.

I made five tea towels in this set, but I gave two away, so I only have three left. I love feeling them, but the problem is that I can’t use them. I know as soon as I put them out, my kids will use them to wipe up spaghetti, grape jam or something else that will stain.

Maybe I should start with the blue one first and see how they do. 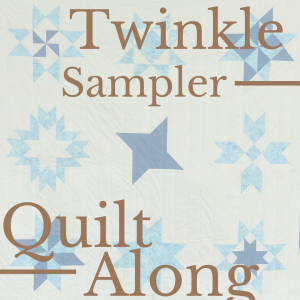